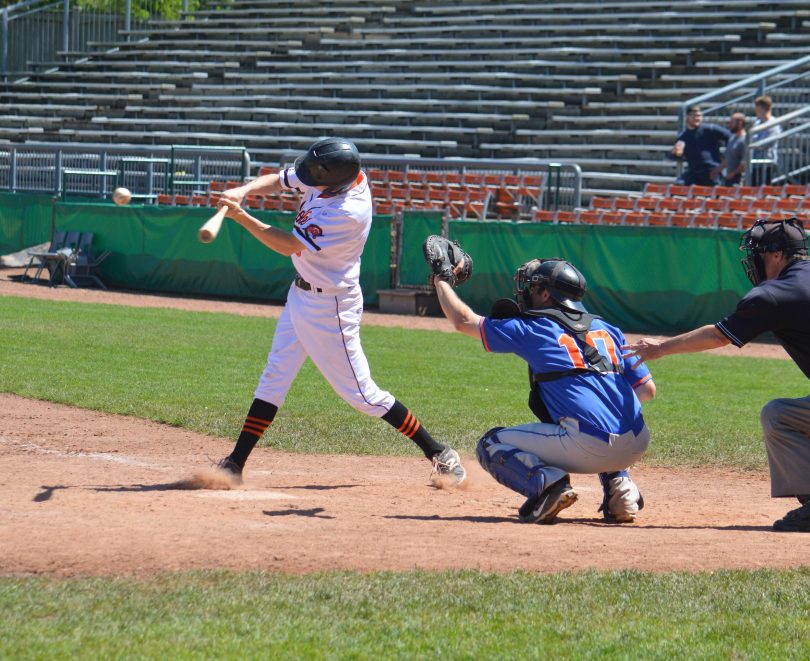 The Orioles of the LMBL had a successful third ‘Pack the Park’ day in June at Labatt Park, as family and friends took in some exciting baseball action.

The LMBL’s 27th season got off to a soggy start in 2019, with most teams not touching the diamond until May 20 – well after the originally planned start date of May 5. But the season quickly ramped up, and the league’s 210+ players (aged 30 to 82) managed to get caught up quickly – with games being played at Labatt Memorial Park, Dan Pulham Stadium, and the St Marys Hall of Fame Diamond every Sunday.

Although most players in the league return to play year-after-year due to their enjoyment of getting back on the field and getting to play ‘real’ baseball, the league does accept new players each season to fill spots left open by players who retire or are required to stop playing for other reasons (work, family, etc.). Marco Desbiens (aka Gus) is one such ‘new’ player, who was drafted by the LMBL Expos for the 2019 season.

“After being away from baseball for 20+ years to raise a family and my work career, I was so excited to capture my youth again with the LMBL,” said Desbiens. “Great teammates, a fun environment, and the perfect day to play ball on Sundays at Labatt Park. I just wish my body would cooperate more. But it will come around. I’m so glad I made the choice to play again.”

As the season moves along, and teams jockey for playoff positioning, competitive rivalries develop. Last year’s A champions, Aquarium Services, look strong again heading down the stretch, as do the always-tough Werewolves. In the B division, the Mets, Giants, and Cubs appear to be headed for a heated battle for the two spots eligible to move up into the A pool for 2020. A 17-game regular season schedule makes every win important. But, of course, in the end as long as there are cold beverages on a tailgate somewhere post-game, a few losses each year are more tolerable!

For more information about the London Mens baseball League, including access to player statistics and how to join, visit www.LMBLBaseball.ca.