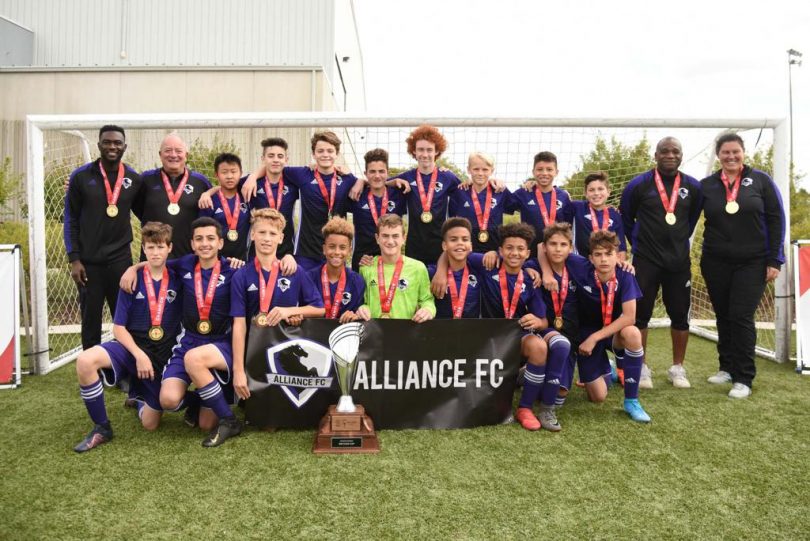 In their 1st year of eligibility, the Alliance FC 2006B Mustangs had an amazing season leading to the Ontario Cup championship game.

After winning the Kick Off Cup and West Region Soccer League (WRSL) with a record of 14-1-0 and an unprecedented 112 goals scored, the team was feeling confident taking on the Ontario Cup!

The team won the Round Robin Tournament in July, beating Kleinburg Nobleton, Glen Shields and Byron, as well as winning the Quarter Finals against Bolton Wanderers and Semi-Finals against Niagara Regional. The finals were set against a tough West Toronto team.

The championship game took place at Ontario Soccer in Vaughan in mid-September and although nerves were high, the Alliance FC boys were ready. Coaches Andrew Loague and Kofi Boateng, both past Ontario Cup winners themselves knew the hard work and tenacity the team had to show on game day.

With only a 1-0 lead until the last 4 mins of the game, the game was intense and fast paced and it wasn’t until mere injury time left, the second goal was scored and game won!

Scoring over 30 goals in this tournament and conceding only 3, congratulations to the U13Boys Ontario Cup Champions 2019 Alliance FC!!!!

The Ontario Cup is in its 104th year, and is the largest club competition of its kind in Canada.