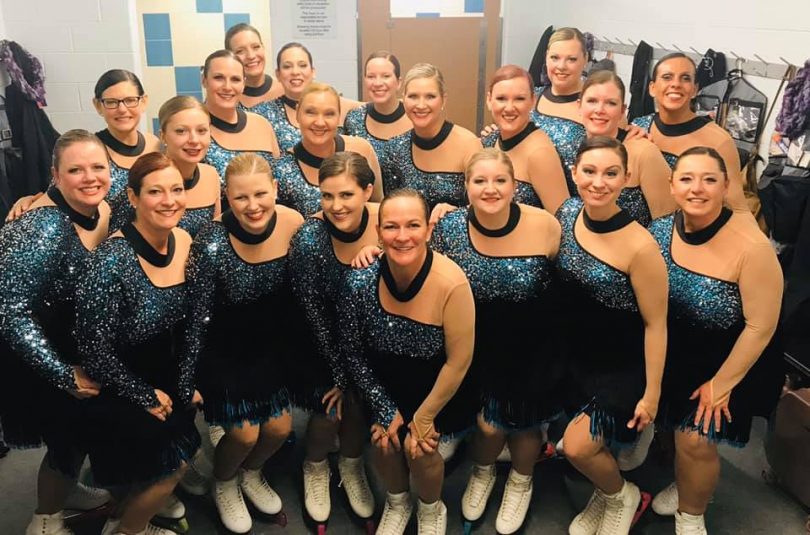 On February 15, EnergICE Adult Synchronized Skating teams travelled to Amherstburg for the Deveau/Winfield Skating Competition. Both teams skated a season’s best score, capturing the gold medal in both the Adult 2 and Adult 3 categories. The Adult 2 team was also awarded the Spirit Award.

Team EnergICE is comprised of skaters from Elgin, Middlesex, Oxford, Norfolk, Huron-Perth and Brant Counties, as well as Waterloo. Skaters range in age (from 18 to 55) and skating abilities.

“Both clubs had talented skaters who were struggling to host teams with a full roster of 16 skaters,” said Coombs. “It was evident from the beginning that we had the right people at the table to make this amalgamation a possibility. After a few meetings and negotiations, the idea came to life.”

Unfortunately, two months into the season, Coombs suffered a brain injury while coaching and was unable to return to the ice. But the teams continued with the help of other coaches, pulling together and learning their program off the ice.

“This incredible group of 30 women pulled together in a true sisterhood to finish their season,” said Coombs. “They were forced early on to become united in this new challenge to succeed.”

Coombs believes that skaters in their teens are hanging up their skates as singles skaters. But she believes there is so much more they can still achieve by joining synchro and potentially skating at a national or world level competition.

“I want skaters to stay in the sport longer,” said Coombs.

The Skate Ontario Synchronized Skating Coach Mentorship program has been a huge help to Coombs.

“I am so appreciative of the mentorship I have received from Jenny Crichton- Beauchamp, a former World Champion,” she said.

Due to COVID- 19, EnergICE has had to postpone their audition process. However, if you have skated in the last few years, you can forward a video or simply wait until Skate Canada gives the team permission to host a tryout. You can email the coach at wendycoombs02@hotmail.com or check out the team’s Facebook page, titled EnergICE Synchronized Skating Team.