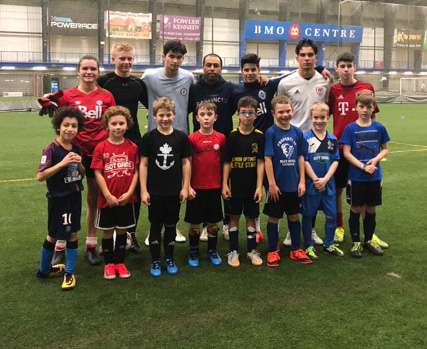 [templatic_contentbox type=”normal” title=”Soccer coach Garrincha had the opportunity to catch up with some of his former players (b. 2002) at a recent training session, and the next generation of soccer talent got to learn from the talented former AG players.”]

At a recent training session, José Figueiredo (Garrincha) caught up with a special group of players (b. 2002) that he coached for many years in London. These players (now U17), who worked with the coach on technical skills while playing for Academy Garrincha (AG), have since moved on as they pursue their respective soccer careers. Garrincha remembers them well.

Eleias Himaras, for instance, who is currently at TFC in Toronto.

“He was a goalkeeper with great potential,” Garrincha recalls. “He has a strong presence and very good technical qualities and distribution, and he’s very comfortable playing out of the back. In fact, he even started and scored for AG several times as a winger in competitive league games!”

Tomas Ribeiro is now out west, playing for the Vancouver Whitecaps – and for the Canadian national team.

“He’s a very gifted athlete with a phenomenal left foot, great vision, and very good pass completion at all distances,” Garrincha says. “He can play all the positions on central midfield. I recall challenging Tomas very often – to the point of frustration. Otherwise, it would have been too easy and comfortable for him!”

Dino Hardarpasic is also playing for the Whitecaps in Vancouver, alongside former AG teammate Ribeiro. Garrincha recalls Dino as one of a trio of athletic siblings.

“He possesses superior technical qualities for such an imposing central defender,” the coach says. “I recall that his parents struggled with the fact that I decided to put him at defender, as they thought defenders didn’t have as much glamour and opportunities in soccer!”

Emily (MJ) Andrus is part of the Team Canada Excel Super Centre program in Ontario, living and breathing soccer daily in Markham as she pursues her soccer goals.

The training session also included youngsters (b. 2011) who are part of the next generation of Academy Garrincha talent, and they had the opportunity to learn from the older players.

“It was very special to have these players back together in their hometown for a training session, as it has been a while since we were all together!” Garrincha said. “I was reminded of so many memories. It was indeed a time filled with challenges and leaps of faith with a unique group of talented players.

“The 2002 and 2003 age group in London was a very strong generation, and I believe have the qualities and the potential to play at the highest level in Canada. Good luck to all as they continue to work hard!”