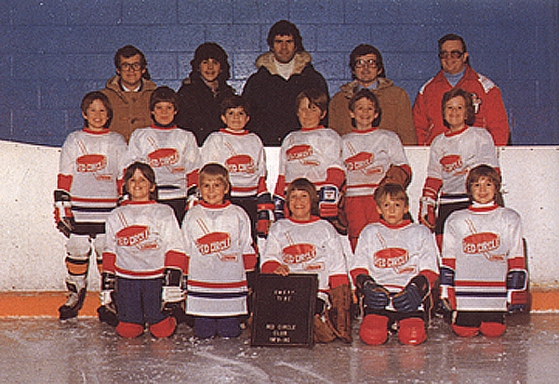 Thousands of kids and multiple generations of players have gone through the Red Circle program. The most famous? Former NHLer Eric Lindros, who began playing in the league’s Tyke Division before eventually becoming an NHL star. Shown here is Lindros’ team photo with Red Circle.

It’s a milestone year for the Red Circle Hockey Club in 2020/2021 – the impressive 50th anniversary of the organization, which traces its creation back to 1971. Today, the originating philosophy continues to be the driving force for the hockey club: ‘Equal Opportunity Regardless of Ability.’

There was a day when London had only four skating pads (Silverwoods, Farquharson, Carling, and Kinsmen), each of which was outdoors, and when minor hockey was hardly heard of. Organized youth hockey eventually took off, including at rinks like Stronach Arena (the home of Red Circle), and the Ontario Minor Hockey Association (OMHA) was the early (self-appointed) governing entity for all of Ontario.

The OMHA set the rules. But people like Mac Beach, Al Langille, and Jim Leonard, Red Circle visionaries, felt there were kids (and parents) who did not want to play stringent competitive hockey. These kids were not your superstars (nor did they want to be). They just wanted to be involved in a hockey program where they would be treated equally and get as much ice time as the other boy or girl.

The Stronach Minor Hockey League evolved from Mac’s dream and provided a ‘house league’ program for these young kids. There was still competition between the teams, but it wasn’t ‘win at all costs.’ Soon, the league grew and encompassed players from ages 5 to 17. Membership in the club grew, and in 1971 the league was incorporated as The Red Circle Hockey Club.

Since then, many thousands of kids and multiple generations of players have gone through the Red Circle program. Today, Today, the league consists of dozens of teams and more than 1,000 players aged 4 to 20 (from Mite to Juvenile). Red Circle caters to all levels of hockey ability.

Besides a fun House League program, which continues to grow, the Red Circle Hockey Club also has a Select program which travels and competes against other centres in southwestern Ontario. Players who are registered and play in the House League program make up the Select teams.

Registration is open for next year. Early bird pricing has been extended to June 1. One thing players can be guaranteed from registering with Red Circle? ‘Equal Opportunity Regardless of Ability.’