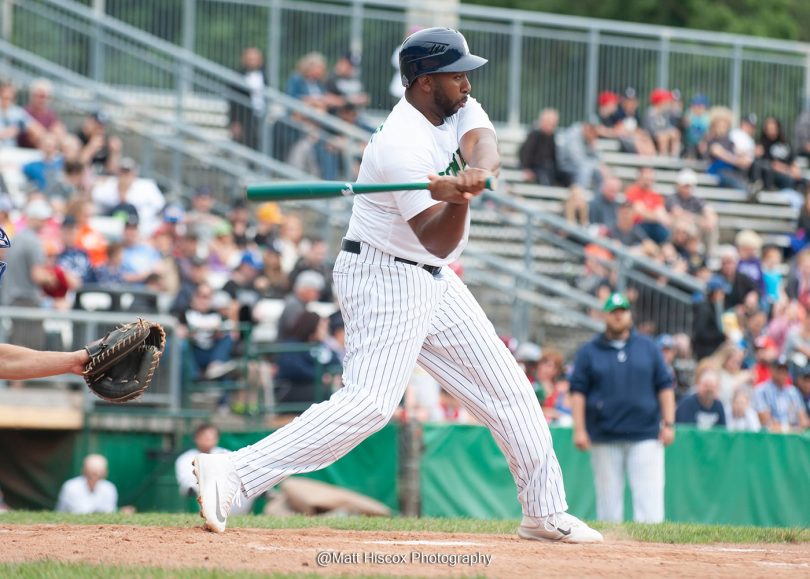 The London Majors made a recruiting splash during the offseason, signing numerous new players to fill the many departures from last year’s team. But there were key returnees, too, including (from left to right): Cleveland Brownlee, Byron Reichstein, Mike Ambrose and Owen Boon.

Prior to the COVID-19 pandemic, Roop Chanderdat, Co-Owner, GM and Field Manager of the London Majors, had a very busy offseason putting together a solid team for the 2020 season. While an Intercounty Baseball League (IBL) season is very much in the air due to COVID-19, the Majors will be a talented bunch if or when they get the chance to hit the field.

Addressing the pitching staff, Chanderdat recruited a number of solid arms, including familiar faces Ayden Hannon (a London Major in 2019) and Dylan Brooks (a Major in 2018 who is coming back from arm surgery). Pitching recruits also included a pair of arms from Quebec – Rene-Dave Pelchat and Fernando Fernandez-Beltran (obtained in a trade with the Guelph Royals) – as well as Josh Krstulovich (Oshawa, ON), a former Durham College pitcher, and Pedro De Los Santos (Toronto, ON), who played for the IBL’s Toronto Maple Leafs last season.

Among the four import spots available, Chanderdat signed Jose Vinicio, a shortstop from the Dominican Republic who reached Double-A while playing for three MLB organizations (Boston, Chicago and Arizona), and Rodrigo Ayarza, a middle infielder from Panama who reached High-A and played in the Texas and Houston organizations.

Chanderdat also nabbed pitcher Edwar Cabrera (Dominican Republic), who reached the major leagues, starting a pair of games in 2012 for the Colorado Rockies, and Juan Benitez, a fellow Dominican who pitched for Quebec in the Independent CanAm League in 2018.

On the hitting front, returnees Ismael Pena (an OF/P who was a second-team All-Star in 2019), Josh Williams (1B/OF), and catcher Jonathan Thibodeau were signed, as well as new recruits Julian Johnson (Mississauga, ON), a 1B/3B who played for Burlington and Toronto in the IBL from 2016-2019, Alex Hendra-Brown, a BC-born outfielder with playing experience in Sweden and Australia), Max Von Gemmingen (Brampton, ON), a utility player who attends Division I Spring Arbor University, and Udhay Bal, another utilityman from Brampton, ON who attends Mount St. Marys University.

Finally, there were several local players looking to crack the roster, including outfielder Rhys Cornell, infielder Jordan Camara, and catcher Damon Crumplen. In other words, it was a very busy – and successful – offseason of recruitment for the 2020 London Majors. As of early May, it was unknown whether there would be an IBL season this year, due to COVID-19, but it’s clear that if there is, the London Majors will make a lot of noise with a talented and diverse roster.