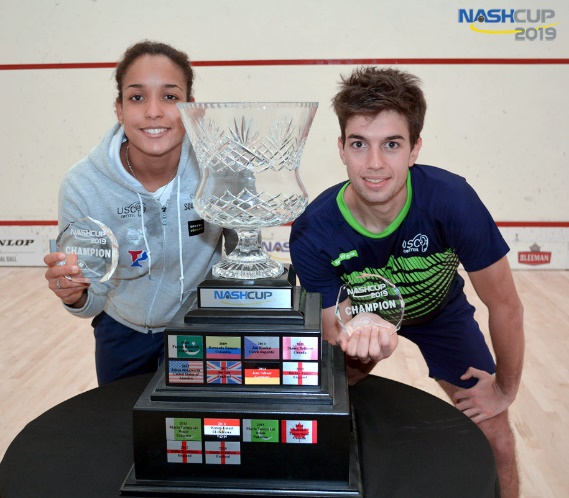 A pair of players from France, Auguste Dussourd (right) and Melissa Alves, captured gold medals in their respective men’s and women’s championship matches at the 2019 Nash Cup.

It was a clean sweep for the French this fall at the 12th annual Nash Cup, London’s premier squash tournament which was held at the London Squash and Fitness Club and drew competition from around the world. When the dust settled after an exciting Saturday night of finals competition, Auguste Dussourd and Melissa Alves were crowned men’s and women’s champions, respectively, at the PSA-sanctioned tournament.

“This event is a massive undertaking, and there are a huge number of people to thank for their support and involvement,” said Jay Nash, the tournament’s host, as he cited ‘sponsors, volunteers, organizing committee members, ticket holders, club staff, referees, amateur competitors, match writers and billets.’

For 12 years now, the Nash Cup has welcomed international athletes (from 42 countries) to compete in what has become one of the top stops on the PSA tour. Squash fans in London (and those traveling to the city for the tournament) have been rewarded with the opportunity to watch world-class competition during that time, while also getting to know many of the athletes.

“I can think of few professional sports where you can be mere feet away from an intense battle, and under an hour later be sharing a beverage with both the champion and the runner up discussing the quality of the match,” said Nash. “They are truly wonderful and positive people to be around. A big thank you to all 48 participants. You made the week great!”