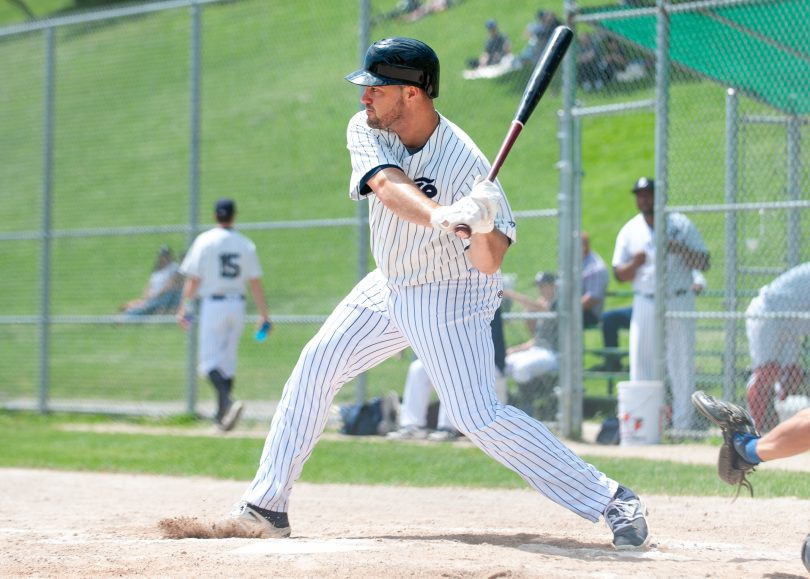 Chris Chambers returned to the London Majors for a weekend in June, seven years after he last suited up for the team.

Seven years. That’s how long it was between London Majors games for Chris Chambers, who returned for a weekend in June to suit up for his old team. And it was an emotional homecoming for the Redwood City, California native, who grew a lot – both as a player and person – during his time with the Majors from 2009 to 2012.

“It’s crazy how taking a chance to play baseball in London, Ontario shaped my whole life,” said Chambers, who originally joined the Majors in 2009 after a year away from baseball following his career at Oklahoma Baptist College. “I thought I was done for good until Roop [Chanderdat] called. Little did I know, my whole life would change for the better.”

Chanderdat, the long-time Majors’ manager, recruited Chambers in part thanks to pitcher Josh Palmer, who had attended college with Chambers. The California native also lived next to Mason Reilly, another former Major. Chambers joined the team as a 24-year-old in 2009. While in London, he met his future wife, met some of his best friends, and succeeded on the diamond.

But it wasn’t always smooth sailing – especially during his early days. Chambers recalls vividly an incident in 2010 that had a profound impact on him. Playing in Toronto, he hit a lazy fly ball to right field and didn’t run out of the batter’s box. When the ball was caught, he threw his helmet. Roop, he says, was not having it.

“He gave me a stern talking to in front of everyone in the dugout,” recalls Chambers. “He made an example out of me. He then made me go sit in the bullpen. He was letting the team know how important it is to always play hard. He said it’s the same way you live life: you play/live right so you have no excuses. It stuck with me then and until now.”

Chanderdat, Chambers says, was a sort of father figure during his time in London. Their relationship was a good one, and they’ve kept in touch ever since Chambers hung up the spikes after the 2012 season when he took over operations of his family’s appliance store. It was a tough decision, as London had become his second home. Kelsey moved to California and the couple got married soon after (and now have two kids).

Fast forward to June 2019. Chanderdat had a three-game weekend on deck and was short a player. With one of the team’s import players unable to get a VISA in time, the Majors had an open spot. Chanderdat phoned Chambers. This time, it was an easy decision.

“I came to London with my whole family, and we had the best weekend,” Chambers said. It was even more fun than I expected.”

He played in all three games, including a 6-3 win at Labatt Park against the Guelph Royals on Friday, June 7. On the Sunday in Toronto, Chambers went 2-for-4 with an RBI single, scoring Kyle Gormandy to put the Majors ahead 4-2 in the sixth inning. They went on to win 6-5, their second win in three weekend contests.

“Coming back seven years later really opened my eyes to what Roop and the Majors bring to everyone,” said Chambers. “To see, from a new perspective, the grind year in and year out to help the young men and support the city was mind-boggling. It’s something I never seemed to notice as a 24-year-old kid who just showed up and played.

“I can’t thank the Majors and Roop enough for allowing me to be part of such a great tradition in the city.”