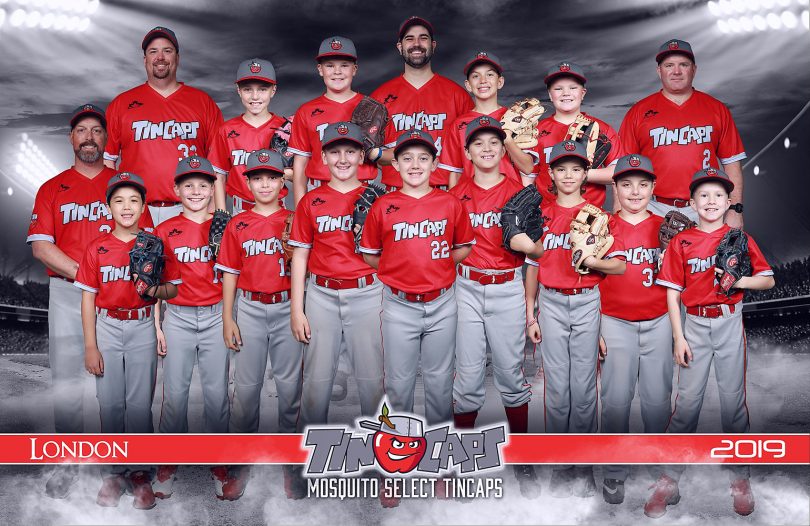 Improvement was the name of the game for the London West Tincaps Mosquito Select team in 2019, as the squad made great strides from their early spring days to the end of the season – when they nearly beat the top team in the league (with a record of 17-1) in one of the final regular season contests of the year.

“As a team, that’s when we realized just how much we had improved during the course of the year,” said Glen Keogan, the team’s head coach. “Our team really demonstrated a strong level of commitment and an eagerness to learn this year.”

The Mosquito age group is where a lot of new aspects of the game of baseball are introduced, and the Tincaps Select team learned a great deal and put new skills into action all year – both in practices and games. That included base stealing, secondary defensive responsibilities, and the concept of the live ball.

“For many of the players, live pitching is relatively new,” said Keogan, who is in his fifth season coaching baseball (and first with the Tincaps Selects). “We were able to have all 13 players pitch this year. We have dedicated time in practice for working on throwing mechanics so that it can also transfer to their pitching.”

The team, which played its home games at Hazelden Park, also worked on game awareness, which really showed as the season progressed – in both league play and tournaments. The Mosquito Selects even earned the top seed heading into the LDBA B Championship tournament.

“The team really came a long way,” said Keogan. “And our players learned to be really good teammates, all working towards the same goal. We finished strong.”

Contributions by Glen Keogan and photo by XGEN Photo